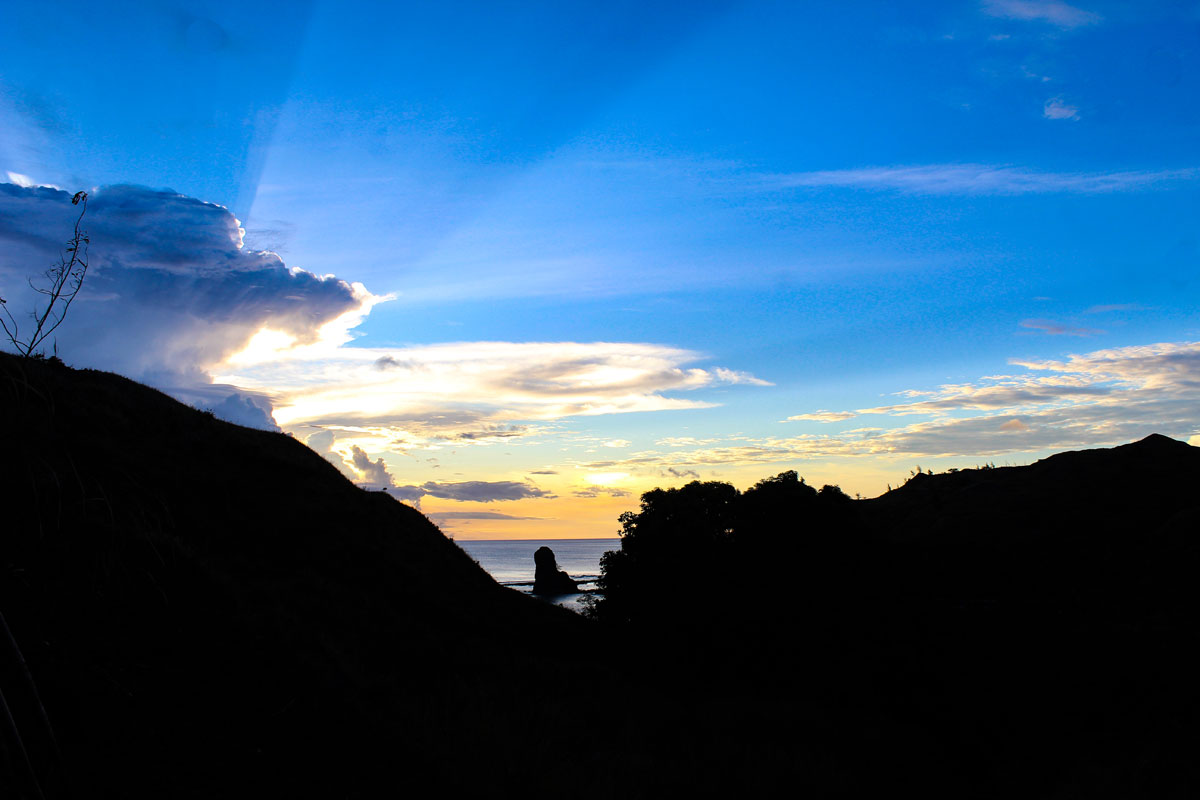 LasoFu’a in the Distance, courtesy of Michael Lujan Bevacqua

CHANT
A Litany of Despair
By Jay Baza Pascua

Guåhan has a long and complex colonial history — with Spain, Japan, and the United States. Currently, the island is an organized unincorporated territory of the United States, with a non-voting delegate to the House of Representatives, and a governor whose actions are subject to veto by the Secretary of the Interior. The island’s residents cannot vote in the presidential election, and the island’s local legislation may be overridden by Congress.

As an unincorporated territory, the island’s political status — and therefore the island’s relationship with the United States—remains unresolved. The Government of Guam’s Commission on Decolonization has established three task forces to aid citizens in considering each option in resolving this status: free association, independence and statehood.

Most Americans are unaware of the history of and issues surrounding Guåhan and its political status. To some extent, members of our community in Guåhan may also lack clarity on this history and these issues, and the efforts made by generations of island leaders to challenge the status quo and assert the rights of the indigenous CHamoru people of Guåhan to have a voice in the democracy that governs them.

In Guåhan, we live in a strange space of contradictions. We are citizens of the most powerful and celebrated democracy in the world, and yet, we are in the shadows, on the margins. The inability to fully participate in democracy and exercise inalienable rights has affected and shaped generations of CHamorus. Yet many of these important stories have for more than a century been drowned out by distance, by time, by the island’s seeming smallness, from the centers of power that govern the United States and its territories.

We don’t believe that distance, time, or seeming smallness diminishes the immense value of and our need for the stories, voices and perspectives of the CHamoru people. We believe that a strong democracy depends on ensuring there is space for ideas to flow, for many voices to sound out and be heard. A strong democracy depends even more so on the openness of its citizens to diverse perspectives, on thoughtful discussion and on the power of listening.

To foster community discussion on these issues of civic engagement and democracy, Humanities Guåhan, with funding from The Andrew W. Mellon Foundation, has produced a webinar series and this magazine, both online and print, exploring diverse CHamoru perspectives, stories, and historical, creative and personal reflections — which have been historically marginalized — on the island’s current unincorporated status and lack of voting rights at the national level, self-determination and future political status. A strong democracy is an ocean of voices, and we hope our magazine reflects this.

We are a humanities council with ancestry throughout the Pacific and beyond, and we believe deeply in the value of the stories of all peoples for whom Guåhan is home. We chose this project, centered on the CHamoru people, the indigenous people of Guåhan — our families, our friends — with respect and sorrow for the injuries of history, hope for the future, and love for Guåhan.

Humanities Guåhan spells CHamoru as updated by I Kumisión i Fino' CHamoru yan i Fina'nå'guen i Historia yan i Lina'la' i Tåotao Tåno'. Please note that this magazine also preserves writers’ and artists’ preferences for older orthographies, which spell CHamoru as Chamoru or Chamorro.

Guåhan is the indigenous CHamoru name of the island of Guam. Guåhan means “having.” It is from the root word “guaha” or “to have.” Both Guam and Guåhan are used interchangeably in this magazine.